My minds a blank, now what do I do?

As a writer I depend on my thoughts, my dreams. That's how I build my stories.

My characters fill my mind, showing me which way to go in their story.

But when they cop an attitude, my writers life comes to an abrupt hold. 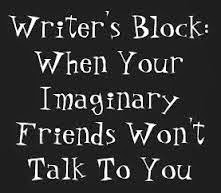 I'm in the middle of working on three stories and my story book friends have all got along, until a few days ago.  I woke up to the silent treatment from each and every one of them. Now I could have dealt with a tantrum from one, maybe two, but all of them? Really? I don't believe I deserve this kind of treatment. Don't they realize their lives depend on me?
Then I sat back and realized my mind was blank, completely quiet. It was the first time in years that I had complete silence on the inside and I panicked.
What did I do? What if they don't come back? Should I bake them some cookies, promise them more time, more sex? I was grasping then I realized I truly needed rehab. I was talking to my self, and my imaginary friends.

After a few deep breaths, and a couple pots of coffee I realized my characters didn't hate me, they were actually looking after me.
Things have been very stressful. I have a very demanding day job, a family to care for and books I'm trying to write and they saw what I needed. A few days of peace and quiet.
It's so nice to have friends that love you, even if they're only in my head.
So I took a few days and did some mindless catching up on e-mails and file cleaning. Just getting organized lifted some of the fog from my brain and I started to hear the voices again, and I smiled. 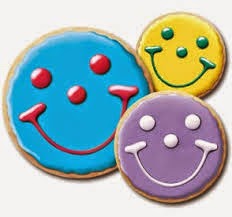 I was told that if I ever got lost, or confused, change my focus and what I was doing, or going would come back. So I tried it and it worked
Now I'm going to get some words on paper, and get back in the groove.
The voices are quiet, but getting louder each day, and soon I will be arguing with them to be quiet, and wait their turn. Until then I am going to write what ever comes to me because it might not seem like a lot now, but later it might be the best story I've ever written. 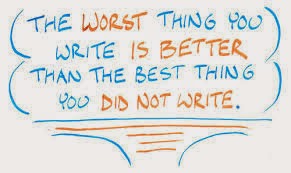 If you ever find yourself staring at a blank screen, turn it off , step away and don't worry. Your friends will follow and show you the way back to your next best seller.

Thanks for stopping by.

Here's a sneak peak into my next book,

What if you found out the daughter you buried was alive and being held captive by a man you thought you killed?

Ron Daily loved being an FBI Agent. It was his life, and the only family he had left since the death of his daughter. Then his world crashed around him when he found out the terrorist group he thought he destroyed staged her death, and she was alive. With time running out and no evidence to fall back on, the FBI refuses to help,  leaving Ron on his own.  He is forced to form an alliance with Patty McCarthy. A stubborn redhead who tests his patience, invades his restless nights, but holds a key to a secret from his past. Can they put their differences aside to find the kidnappers, or will Ron's past resurface, destroying Patty's trust, and causing him to lose his daughter for good?

Crouching low, Ron backed into the shadows. He peered down at his watch and a low growl escaped past his clenched jaw. Something was up, Dwayne was late.  Shit. He had to show, it was his last shot, her life depended on it.
He kicked at the rocks beneath his feet and a spider raced across his boot. His heart jumped in his chest and he jerked back against the concrete wall. Damn things. He shook his foot as another scurried into the shadows. This was not his favorite place and Dwayne  knew that. The bastard was late on purpose. Ron’s face heated up as his anger burned inside him. Two years. He lost two years with her, and for what? He crammed his hand into his back pocket and pulled the manila envelope out. The corners were wrinkled, and the side was torn, but the contents were intact.
Pealing back the top he peered inside, then stopped. He had to stay focused and seeing her dark circles, and hollow cheek bones, would not help with what he had to do. He shoved it into the inside pocket of his vest, close to his heart, where he held her memory all this time.
Ron squeezed his eyes shut and swallowed past his mounting aggravation. His daughter, alive. It didn't matter that her blonde hair was shorter, or her face thinner. He’d recognize her anywhere. His stomach churned at the thought of what they put her through. For two years Dwayne let him believe Tracy was dead. He clenched his fists tight to his side and blew out the rage that threatened to destroy this meeting. It was time to get in control, for Tracy’s sake.
Ron inched closer to the edge of the warehouse and peered around the corner, scanning the darkened parking lot.  A light flashed on the horizon and he leaned back, finally. The car maneuvered past the light posts, and broken down road equipment, then backed into the last parking spot, just like always. Ron rubbed his sweaty palms on his black cargo pants and straightened up his six foot frame. He adjusted the gun hidden in his back waistband then rubbed the indentation of his lucky dagger in his right thigh pocket.  Show time.