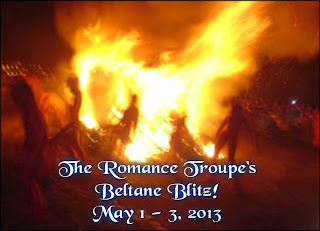 Welcome to The Romance Troupe Beltane Blitz day 3! It's a blog hop, e-party, and giveaway! Lots of ways to win!
Each time you visit a blog and leave a comment with your email address and you increase your chances to win.
For prize details and scavenger hint questions go to: http://www.theromancetroupe.blogspot.com


Beltane is a celebration of fertility, and despite that it's a perfectly natural aspect of the human existence, let's face it -- some parents may not always be comfortable discussing the erect phallus of the god or the open womb of the goddess with their young children, especially teenagers.

I'm writing a YA story called, If I Knew Then.
Its a story of self discovery and how a teenager overcomes abuse, heartache and devastating loss.
Here's an excerpt:


The icy handle stuck to Angel’s wet hand as she tugged the door open. She sucked in a breath and winced as the pain shot across her ribs. They said time heals all wounds, well they were wrong. This shit sucks. Once I graduate I’m so out of here. Her arms ached under the weight of the box so she shifted it over to the left, and rested it on her hip. Damn, now my hip will have a bruise that will match the one across my back.  She shoved the stage door open and kicked it shut behind her, cringing as her entrance echoed through the empty theater.
“How many times have I told you not to slam that door?”   Alice said, mocking their mother’s voice.
She stifled back a laugh. “Yah whatever, get off your ass and help me. I’ve moved all the boxes but one, and that ones for you.”
“Oh, I’m telling mom you swore.” Alice crossed her arms across her chest and stuck her lip out like a three year old. How mature.  “You’re supposed to be watching me, not using me as slave labor.”  Alice was three years younger, and the favorite. Their mother’s favorite. She glared down at Alice’s smug face as her smile widened as she propped her feet up on headrest of the seat in front of her. Angel knew slapping her would have more consequences than she could take right now so she gritted her teeth and dropped the box of costumes in the isle beside her sister.
“Pull these out so I can see which ones will work for us while I go get the last box.”  Angel pulled the box open as her sister bent over and pulled out a few of the old costumes.
“I’m not wearing any of these. They look like Grandma’s curtains. Why do we have to do this anyway?” Alice threw the dresses back in the box and folded her arms in front of her. Angel had about all she could take.
“You know we do the intermission show every year, now find one you like and stop being such a damn baby. Or do you want me to tell mom what you really do during piano practice?”  When Alice’s eyes widened Angel knew she had her. Locking the door and napping when you’re suppose to be practicing Beethoven was really frowned upon with the Nuns, and with Mom. Mom had high hopes that one of her daughters would become a classical pianist.
Not me, I’m going to college for art. It’s my ticket out of this town. Her footsteps echoed as she stomped up the isle and back to the door. She reached for the handle and the door flew open. She slammed against the wall and her head cracked against the concrete blocks. Stars flashed before her eyes and she squeezed them shut to stop the throbbing. She swallowed to stifle the scream that threatened to break loose and opened her eyes to see the door, pinning her to the wall. Her back was on fire as the spasm raced through her. She slowed her breathing and the spasm stopped. Her anger raged as she shoved the door but it was caught in mid-swing.
“What in the hell do you think you’re…”  Angel froze as a head peeked around the door. He was gorgeous. His blonde curly hair fell down past his ears and his eyes were the brightest blue she had ever seen.
“Oh hell, my bad, are you okay?”  His deep voice sent chills up her arms.
She couldn’t move. She just wanted to stare. But she didn’t want to look like an idiot. She blinked and looked towards the other guys standing beside him. They were Michael Deaton and Dave Hicks. A year older but she had a few classes with them. When she realized they were laughing at her, her face heated up. What a bunch of jerks.