Meet Mercedes Kingsley. An FBI intern with a secret to hide. 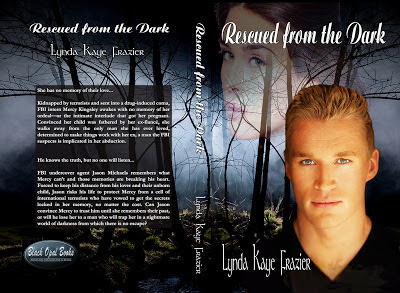 With Rescued from the Dark, coming out soon I thought I'd post an interview with the FBI intern Mercedes Kingsley. She is waiting on a response from her application to the FBI Academy. She struggles with her need to be an agent while hiding a secret that will destroy everything she has worked so hard to build.

Lynda:
“Welcome Ms. Kingsley. I have asked you here to go over a few items in your application for the Academy.  I’ve reviewed your paperwork and would like you to tell me about the incidents that lead to your father’s retirement 10 years ago.”


Mercy;   Mercy swallowed hard, folding her hands in her lap to stop the shaking.
"It was a botched kidnapping which caused a devastating ending to my father’s career. “  They just don’t need to know what else it caused that night.


Lynda;
"Could I have details please, I need it for the application. You failed to give information that we will need for the review board.”


Mercy:
“My parents own a software firm. There were threats made to the company and I was kidnapped because of them. My Father and his partner, Ron Daily, found out where I was. My Dad did not follow protocol and  came in without back-up. His career died that night and so did my dream to be an agent. I could not apply for the Academy as long as my dad struggled to get his life back.  But, as you have read it’s been 10 years and I realized that being an agent was the only thing I wanted to do. So I pursued the internship and applied to the Academy.”  Mercy’s heart raced, pounding in her ears, stay in control, this will be over soon.


Lynda:
“Are your parents fine with the decision? You know your father will be interviewed.  His opinion will be taken into account.”


Lynda:
"I see that you had counseling after the kidnapping, and treatment for an anxiety disorder.  Is this still an issue?  It will affect your ability to be an agent.”


Mercy:
How did they find out? Ron said no one would know, I would have some time. What else can go wrong?
“My counseling was complete, and I was released. I attached my past medical records to my application. My issues are in the past. That should also be stated in my medical papers.”


Lynda:
“It is. I just wanted to hear you say it, and make me believe it.  During the Academy you will be working closely with Ron Daily and his team. Will that be a problem for you? I see you have a close relationship with them, and a personal one with Jason Michaels. Have you read the rules Mercy? We have guidelines and if this is an issue I want to know now.”


Mercy;
Mercy rung her hands together underneath the table. Her heart raced as the sweat trickled down her back. Her head started to spin and she swallowed hard, pushing back her fears. Not now, this can't happen now. It will kill her application quicker than that kiss. The memory of it still warmed her lips but she knew the rules, and the pain she saw in his eyes as she walked away will always haunt her.
“It will not be an issue. Agent Daily and his team have helped me during my internship, and that’s all. We have a close business relationship only. Mr. Michaels and I do not have any kind of relationship, nor do we plan on having one. We both are aware of the rules and what is in stake if any are broken.”


Lynda:
“Ok as long as you are aware that they will also be interviewed.”


Mercy:
Mercy took in a deep breath to calm her nerves as the phone rang.


Lynda:
“I need to take this. I believe I have everything I need. I will contact you when the board reviews your application. Make sure you discuss this with your family. We will be contacting them soon”


Mercy quickly left the room as her heart pounded in her ears. She needed to find her parents, but she had to see Jason first, if he’ll see her.  Mercy swallowed past the fear in her throat. She has told so many lies to hide the truth, and a few secrets she’s not ready for anyone to know and it’s all closing in on her, fast.
Rescued from the Dark, released through Black Opal Books February 16, 2013

She has no memory of their love...

Kidnapped by terrorists and sent into a drug-induced coma, FBI intern Mercedes Kingsley awakes with no memory of her ordeal—or the intimate interlude that left her pregnant. Convinced her child was fathered by her ex-fiancé, she walks away from the only man she has ever loved, determined to make things work with her ex, a man the FBI suspects is implicated in her abduction.

He knows the truth, but no one will listen...

FBI undercover agent Jason Michaels remembers what Mercy can’t and those memories are breaking his heart. Forced to keep his distance from his lover and their unborn child, Jason risks his life to protect Mercy from a cell of international terrorists who have vowed to get the secrets locked in her memory, no matter the cost. Can Jason convince Mercy to trust him until she remembers their past, or will he lose her to a man who will trap her in a nightmare world of darkness from which there is no escape?

He had to get her out of there, but with all the drugs in her system, would she even remember who he was?

Mercy was lying on the bed. Even in the dim light, he could tell she was pale. Her clothes were wrinkled and her shirt caked with what they forced her to eat. From the looks of the room she fought hard. Damn, he needed to get her out before the drugs took her from him.
“Mercy, wake up. Come on, open your eyes.” Nothing. She didn’t move. Okay, she’s not going to like this. “You need to wake up and take a shower, so let’s get both done at the same time.”
He took the chair into the shower and turned it on then went back to the bed. He picked up Mercy, and placed her under the fine mist of cold water. Just what she needed. He held her in the chair as the water flowed over her head, soaking her hair and drizzling down her shoulders. His back was pelted by the spray as he knelt in front of her, but he didn’t care. He shook her shoulders, and she stirred.
“Good, Mercy. Come on, open your eyes.” He struggled to hold her slippery, wet body in the chair. The T-shirt was soaked and her thin bra could not hide the effects of the cold water. He clenched his jaw tight at the thought of never being able to touch her, love her. She has to remember him, remember them. She struggled against his hold as she started to wake. “I’m not letting you up until you open your eyes. Come on, look at me.”
Her eyes flew open. They were filled will fear and confusion as she frantically searched the room. Then her head dropped and their eyes met and he knew.

Hope you enjoyed an insite to Mercy's world.
Until next time.
Lynda