Rescued from the Dark

The opening page, and blurb from my novel.
Book cover made by a critique partner. (Victoria your great)
Love to see my name in print, can't wait for my first contract! 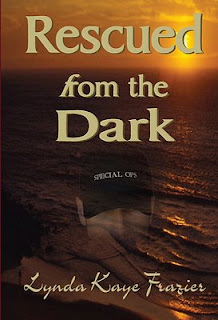 An explosion ricocheted behind Jason’s eyes as the pressure mounted in his head. The rush of panic consumed him as he struggled to move. He tried to swallow but his throat burned from the flames that engulfed his lungs.   He needed to breathe but he could not, shit.  He strained to hear the muffled voices, but the pounding in his ears erased all hope. His head started to spin and he succumbed to the realization, this was it, the end, he won.  The flames were dampening and his heartbeat slowed. As the drums subsided, the voices became clearer.
“Give it to him now you son of a bitch. What were you thinking? We still need him.”
A split second release had Jason sucking in a breath of much needed air. Stabbing pains shot through his head and every muscle fiber burned as the cold blast of air shot through his lungs releasing the oxygen his body craved.  He arched his back and raised his chest trying to pull in more when he felt the impact from the first blow. His head snapped to the side and the crack from his neck echoed in his ears. The pain jolted through his jaw as it raced across his cheekbone. Before he could gather his senses, the hand smacked across his face again and the pain set his face on fire. What the hell? With the third slap his eyes snapped open and he wrenched upright with a lurch, hitting his head on the solid roof of the SUV. Jason’s eyes darted back and forth looking for something familiar until he locked onto the ice-cold stare of the devil himself, Shaun Flanagan. Damn!  That was close. He could not blow his cover, even if it meant he would die as David Logan, and not Jason Michaels


Undercover FBI agent Jason
Michaels is on the most important mission of his career. Infiltrate the
Terrorist cell, that was responsible for the death of his fellow agents, and
rescue the FBI intern Mercedes Kingsley, the woman who secretly shared his bed and stole his heart. Once Mercedes wakes from her coma Jason realizes she has no memory of what happened, who he was, or that he is
the father of her unborn child.
In a race against time, with obstacles
at every turn, Jason struggles to protect Mercedes and their baby, while trying to locate the evidence he needs to take down the terrorist cell before they find her and take back the secrets she has locked in her memory. As time ticks away and danger gets closer, Jason and Mercedes struggle to fight their attraction and put their differences aside as they launch a manhunt, along with the FBI, to save their country and each other
Go back and view the other blogs @     http://weekenddirtydozen.blogspot.com/